FamiliBase is a centre for children, young people and families based in Dublin 10.  FamiliBase has three strands of service delivery i.e. Early Years Care and Education, Child and Family Supports and Youth and Community Supports. FamiliBase operates an integrated model of practice.   Programme delivery in FamiliBase occurs at different levels i.e. from universal level to intensive wrap around practice for those with multiple or more complex needs.   FamiliBase could be described as a ‘one stop shop’ of supports for children, young people and families.

Our organisational vision is to co-create and sustain environments where children, young people and families can grow, develop and flourish in a way that encourages and promotes individual and family potential.

We will provide a continuum of care through a targeted multidisciplinary approach. We will work collaboratively and share progressive practice. We will build a vibrant, sustainable organisation to facilitate the on-going development of our practice and our service.

What kind of organisation is FamiliBase?

FamiliBase is a community based, not for profit organisation with charitable status that works with children, young people and families supported by a range of funders.  It is a Company Limited by Gurantee (CLG) and a Type C organisation under the Charity Regulator’s Governance Code.  FamiliBase has a voluntary Board of Directors with a range of expertise across key areas e.g. finance, accountancy, business, youth work, equality, social care practice, life-long learning, child protection, community development, local government, addiction, public relations.

FamiliBase recognises that not all children, young people and families have the same opportunities and therefore we positively target our resources to promote equality of outcome.  FamiliBase demonstrates respect by welcoming, acknowledging, actively listening, empathising, compassionately challenging, affirming and celebrating individual successes.  FamiliBase commits to integrity at all times by being honest and authentic in our work, accountable in our actions, transparent in our behaviour and interactions and at all times aware of our duty of care to children, young people and families.  Partnership informs all of the work of FamiliBase.  FamiliBase works in partnership on a number of levels.  We partner with children, young people and families, in addition to local, national and statutory organisations, including our funders.  We work collaboratively, respectfully and transparently across all of our partnerships while keeping our advocacy role to the forefront of our work.

Key messages about what FamiliBase does? 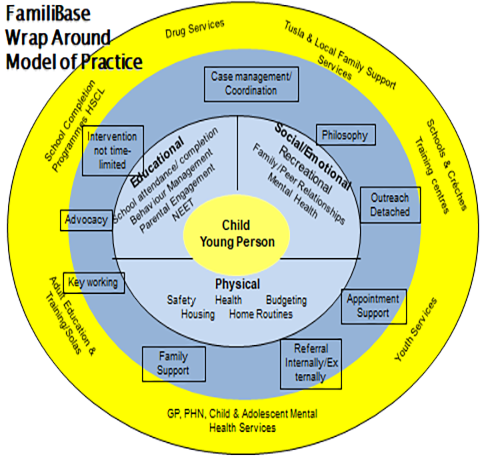 Summary of the FamiliBase model of practice

FamiliBase consists of a multi-disciplinary team with staff recruited from the following range of disciplines; Early Years, Arts, Social Care, Youth Work, Youth & Community Work, Formal Education, Addiction Counselling, Business, Administration and Finance.  FamiliBase has three strand pillars i.e. Early Years Care and Education Strand, Child & Family Strand and the Youth and Community Strand.  FamiliBase operates an integrated model of practice with integration occurring within the programme pillars and also across them.  The level of integration is based on the needs presenting from the children and young people.  Programme delivery in FamiliBase occurs at a range of different levels i.e. from universal level to intensive wrap around practice[1] for those with multiple or more complex needs.  FamiliBase could be described as a ‘one stop shop’.  In FamiliBase’s experience, a case-management approach, is the most effective for children and young people with more complex and/or multiple needs.   This includes pro-active and where required intensive outreach & engagement strategies including school/training morning programmes, weekly home visiting, support to statutory appointments, street-work, individual key-working.  To facilitate positive outcomes for the children, young people and families this requires time, trust, respectful relationships and persistence.  The philosophy of the organisation is significant in terms of how the practice is supported at that level.  From FamiliBase’s perspective the ‘how’ of what it delivers is as important as the ‘what’.

The overall philosophy of FamiliBase’s model of practice and service delivery is reflected in the organisation’s values.  It is underpinned and informed by three discourses; the discourses of ecological systems theory, equality of outcome and community development.

Bronfenbrenner’s ecological theoretical framework is used in terms of understanding the external influences upon the child/young person and his/her subsequent development and the interaction of the various external factors and systems that operate around an individual child/young person.

Bronfenbrenner’s theory identifies 5 subsystems whose existence and interrelationships he proposes have an impact on human growth, development and behaviour.   FamiliBase’s model is developed in cognisance of the subsystems that operate in and around a child and young person and also in how the subsystems interact with each other and to what end.

Lynch and Lodge’s framework of four major generative roots of inequality also influences FamiliBase’s model of practice.  In particular their identification of the separate but inter-related challenges for those interested in social change.  FamiliBase are mindful of these four areas of inequality in planning its programme delivery and seeking to effect change in partnership with the children, young people, families and wider community.

“both an occupation (such as a community development worker in a local authority) and a way of working with communities. Its key purpose is to build communities based on justice, equality and mutual respect.”

In the context of the work that FamiliBase is engaged with, it is the way of working that is most relevant.

“Community development involves changing the relationships between ordinary people and people in positions of power, so that everyone can take part in the issues that affect their lives. It starts from the principle that within any community there is a wealth of knowledge and experience which, if used in creative ways, can be channeled into collective action to achieve the communities’ desired goals.”

FamiliBase Board of Directors meet on Tuesdays on a 6 weekly basis.

[2] FamiliBase Youth Supports operate from a Critical Social Education Model of Youth Work whilst also recognising the ecological systems theory framework in the context of the relationships with individuals’ environments within communities and the wider society.

Familibase.ie uses cookies to help improve your experience while using this site. We hope this is ok?

We may request cookies to be set on your device. We use cookies to let us know when you visit our websites, how you interact with us, to enrich your user experience, and to customize your relationship with our website.

Click on the different category headings to find out more. You can also change some of your preferences. Note that blocking some types of cookies may impact your experience on our websites and the services we are able to offer.

These cookies are strictly necessary to provide you with services available through our website and to use some of its features.

Because these cookies are strictly necessary to deliver the website, refusing them will have impact how our site functions. You always can block or delete cookies by changing your browser settings and force blocking all cookies on this website. But this will always prompt you to accept/refuse cookies when revisiting our site.

We fully respect if you want to refuse cookies but to avoid asking you again and again kindly allow us to store a cookie for that. You are free to opt out any time or opt in for other cookies to get a better experience. If you refuse cookies we will remove all set cookies in our domain.

We provide you with a list of stored cookies on your computer in our domain so you can check what we stored. Due to security reasons we are not able to show or modify cookies from other domains. You can check these in your browser security settings.

We also use different external services like Google Webfonts, Google Maps, and external Video providers. Since these providers may collect personal data like your IP address we allow you to block them here. Please be aware that this might heavily reduce the functionality and appearance of our site. Changes will take effect once you reload the page.